Foundry Review: Diplomacy in the Gamma Quadrant, by @marhawkman

Melani Di’an has convinced the High Council to send someone on a diplomatic mission to open trade relations in the Gamma Quadrant.

In ‘Diplomacy,’ your captain journeys to a distant world in the hopes of turning an old enemy into a new ally. While this episode has some combat, it has a strong focus on storytelling; however, that’s not to say it is a heavy roleplaying mission either. There is some limited branching dialogue, but the script mostly follows a linear path. That’s not necessarily a bad thing: the dialogue is well written and free from spelling or grammar problems (other than one single-letter typo).

The maps in this mission really shine.  Both of the planets your captain visits are heavily customized and make good use of environmental factors like fog and water. The author clearly put a lot of time into the environments and it pays off in terms of immersion. Better yet, the author hid several Easter egg interacts and dialogues throughout the maps to reward attentive players. 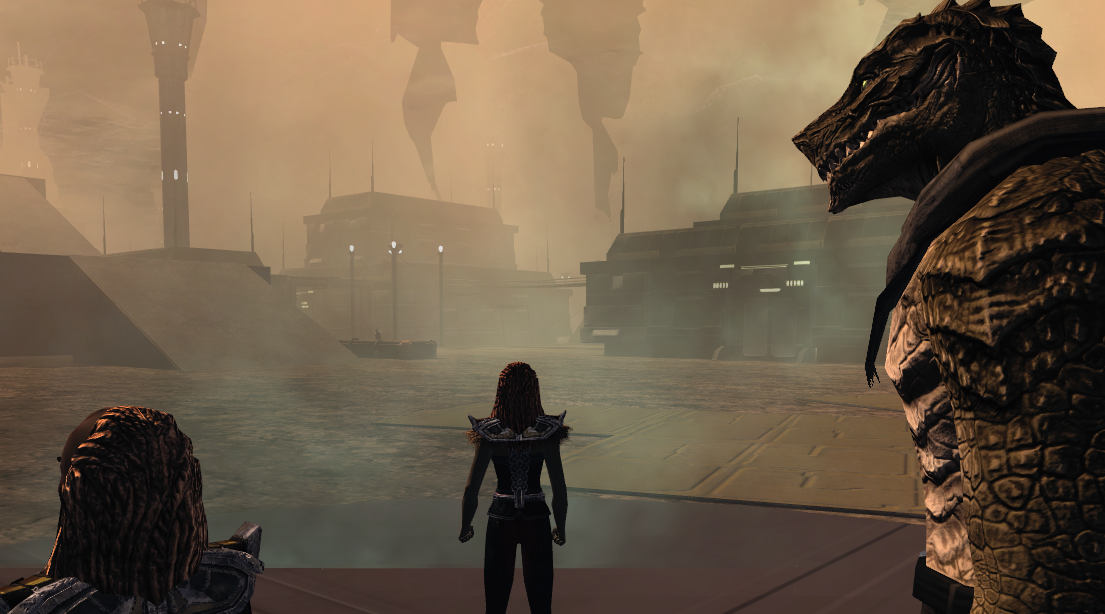 The ground maps also have some repetitive action; twice, your captain is required to pass through a series of checkpoints before advancing the story. The author does a good job explaining the reason for the action and disguising the basic mechanic, and I thought this was a better way to ensure the length of the episode (and thus ensure rewards) than using switchbacks or other more simplistic techniques. As a side effect, this ‘enforced exploration’ lets the player see more of the author’s excellent custom maps.

The episode’s single combat encounter is a well-balanced fleet action between multiple friend and enemy ship groups. Each phase of the fight has a brief break that helps ensure newer players don’t get overwhelmed by multiple enemy waves. I did notice that the battle did not contain any large enemy ships; on one hand, this ensured that the fight proceeded at a quick pace, but on the other is reduced the challenge of the encounter.

From a technical point of view, this is basically a flawless mission. I did not observe any of the technical defects listed on my scoring matrix and the gameplay experience went very smoothly. The episode does however have a serious problem: just as I was starting to get really drawn into the story, the mission abruptly ends. It does not provide any indication that I needed to play a sequel mission, and I did not see any other KDF missions by the author. This was a disappointing development to see in what was otherwise a very good episode.

As I mentioned, this episode did not have any technical defects and it earned the full 64 points for technical quality. This episode was also well on track to earning bonus points for innovation and fun, but the abrupt ending at the start of the “rising action” phase of the story also caused the episode to stop short of fully achieving those objectives. The final score for this episode is 64 points out of 100.